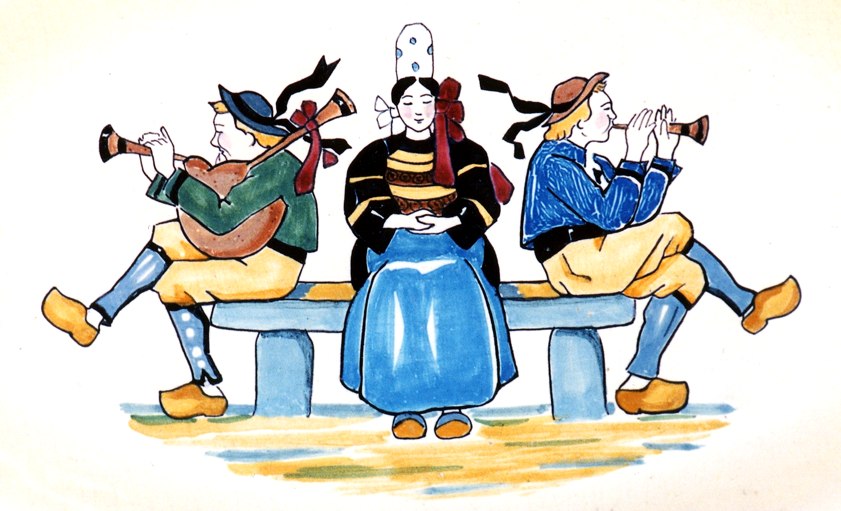 The Town, The People and The Pottery 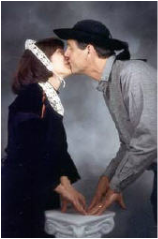 Here we are in vintage Breton outfits!

Welcome to the wonderful world of old Quimper!

www.oldquimper.com is written in the hopes that it will serve to increase your knowledge and enjoyment of Quimper pottery.

So just who’s doing all this writing and picture taking? We are Adela and Mark Meadows. Professional antiques dealers since 1980, our business is The Meadows Collection. You may have read our book, Quimper Pottery...A Guide to Origins, Styles, and Values, seen us on television including multiple segments of Collectible Treasures on HGTV or read about us in the Antiques Journal, Maine Antiques Digest, Country Register or West Coast Peddler. Our business has taken us all over the United States and Europe, giving lectures for various groups and selling at select antiques shows. We also sell through our web sites...hence the Shop in Your Slippers link.

Quimper...pronounced "kem-pair"...is a town in northwestern France in the area we call Brittany. In France, the region is known as Bretagne;  the Bretons have their own language and they call the region Briezh. Quimper is located in the western portion of Brittany and has been an active center of pottery production since the days when the region was part of the Roman Empire. By train, it is some 388 miles from Paris and serves today as the chief-lieu of the département of Finistère. This is akin to being the administrative capital of an American county.

We love Brittany! Centuries of tradition have left their mark on this delightful place and we believe that having a better understanding of the town and the people of Quimper...as well as the towns and the people of the entire region...will serve to further your enjoyment and understanding of vintage Quimper pottery...an art pottery that is also based on centuries of tradition! 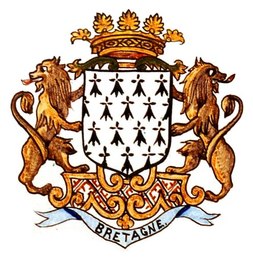 From a nineteenth century Quimper plate, the crest of Bretagne...the region of northwestern France that we know as Brittany.
The people of Quimper...known as the Quimpérois...are of Celtic origin. The "founding fathers" of Brittany migrated from Cornwall, Ireland, Scotland, and Wales, settling into the area in the fifth and sixth century A.D. Brittany is one of the six Celtic nations. As noted above, the people of Brittany are called Bretons and their native language is not French, but rather Breton, a form of Gælic.

Early Bretons were quite insular, each hamlet almost a world into itself, and in many instances folks from neighboring villages spoke such differing dialects that they actually couldn't easily communicate with each other.

While Brittany officially became part of France in 1532, the Bretons retained their unique Celtic customs and, to put it mildly, did not easily assimilate into the French culture. This feeling of separation from "France Proper" was, and is, very strong. For example, Brittany voted after World War II to no longer be part of France, but the French government declined to accept the result. I mention this to explain why the Bretons do not necessarily see their pottery as being part of the "Country French" style...instead, it is uniquely their own.
Each month since June of 1999, we've been writing articles on various subjects related to Quimper pottery...be sure to check out this month's article about Quimper...The Town, The People and The Pottery.  ﻿﻿We publish a new issue on or about the first of each month; if you would like an email reminder when a new issue comes out, please email us at oldquimper@yahoo.com.
To get to this month's article now...click the button below:
The Town, The People and The Pottery
But if you'd rather get shopping...click this button...
Shop in Your Slippers
​Other links...which you can access from the top of this page...are Factory Marks, providing a sampling of the various marks used by the different potteries, Memo from J-P, a cat's eye view of our adventures in Brittany and Contact, which is just that...information on how to contact us!
Thank you and enjoy!
Adela & Mark Meadows
The Meadows Collection


oldquimper@yahoo.com  We eventually answer all correspondence...please be patient and be sure to check your computer settings because sometimes we end up in your SPAM folder. In cases where a question or comment may be of general interest, we reserve the right to publish it and promise to do so while taking the utmost precautions to respect your privacy.