﻿﻿Markings for the pottery known variously as the Grande Maison, de la Hubaudière or the HB factory: 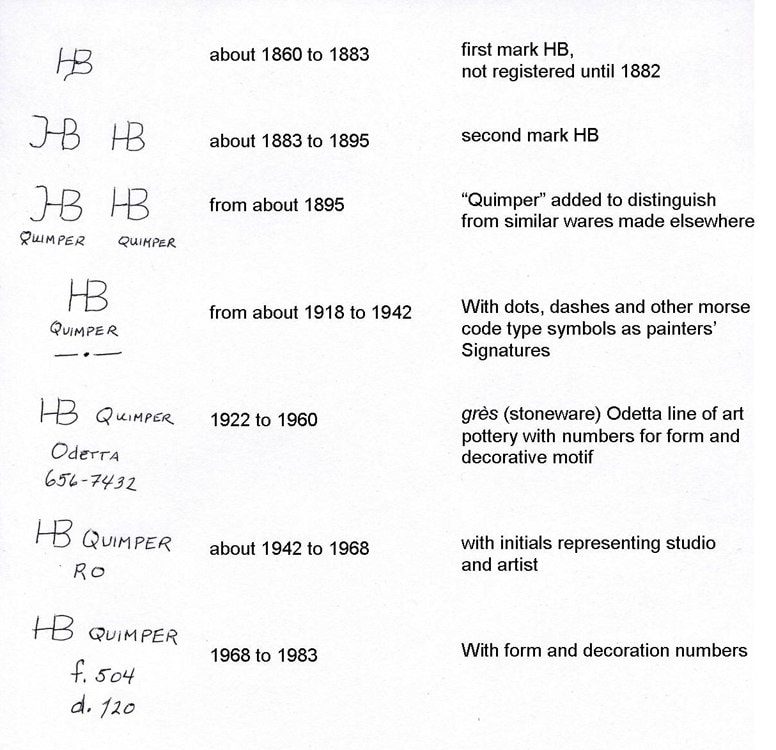 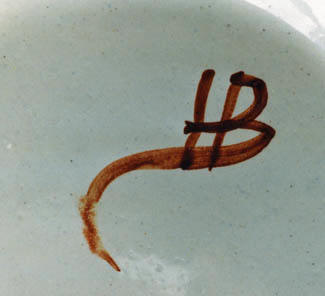 This early HB mark..."H" for Hubaudière, the factory owner at the time, and "B" for Bousquet, the original founder...The "B" curves under the "H"...length of the "tail" varies and the mark may be red, black, blue, etc...there is no known significance to the color. 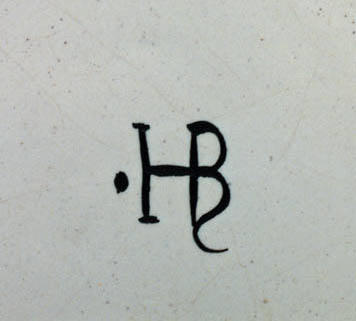 This is a variation of what has come to be known as "first mark HB"; it has an additional dot...thought to signify a specific artist. 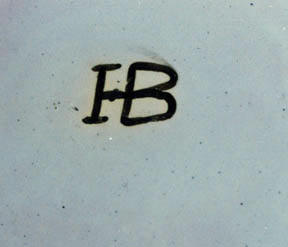 In August of 1883, the HB factory registered this mark...the conjoined letters without the "tail"...apparently hoping to make a distinction to note the end of the period when Fougeray served as factory director...although, in reality,  habits being difficult to break, it is not unusual to find a piece from the first quarter of the twentieth century with an earlier mark.

On more elaborate or décor riche examples from circa 1900, numeric artists' designations can be found added to the HB mark. 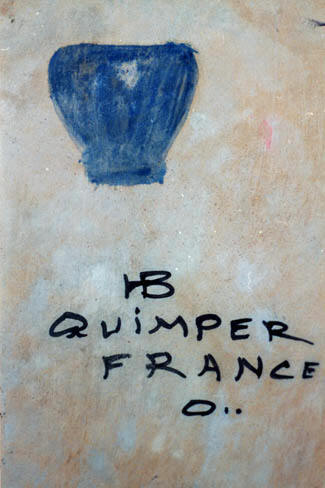 After Jules Verlingue purchased the HB factory, he had the artists add a "morse-code"-like "signature" to identify their work. This remained the custom at HB from 1917-1918 to 1942. (Note that the vase painted on the bottom of this example has no known significance...it was perhaps just a handy place on which to record an idea). 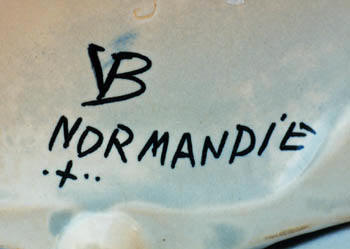 From 1922, until his retirement in 1932, Jules Verlingue took on Louis Bolloré as a partner. Some of the decorations...notably those from the provinces françaises series...were signed with a conjoined "VB" to note their  association.  While these pieces are not marked with the word "Quimper", the presence of the "morse-code" lets you know that they  definitely are Quimper. 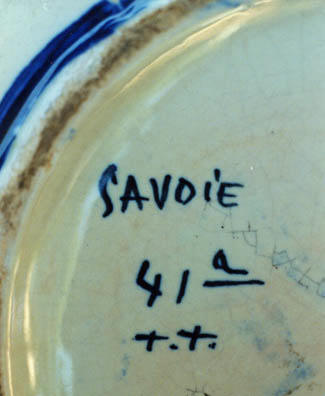 Here's the mark on a piece decorated with a scene inspired by the region of Savoie...what we call Savoy...in eastern France... 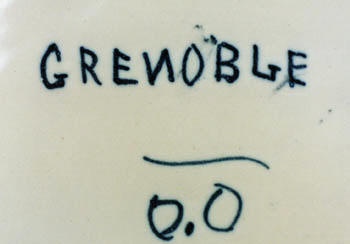 ...and here's the mark on a piece decorated with a scene from the alpine town of Grenoble...again, the "morse-code" markings indicate their Quimper origins.

When a factory decorator retired or left HB, his or her "morse-code" mark was re-assigned; so you may find pieces with the same painters' mark that look decidedly different. Thus, studying the execution of the decoration can be a more reliable indicator than  the mark.

Sometimes more than one painter worked on a piece, especially when the motif is intricate and painterly. Such pieces may be signed in the central motif by a particular artist and then have a "morse-code" mark on the reverse. This practice led to an earlier belief that Paul Fouillen had been assigned the "#" mark when he first worked for HB. However, what that mark really means is that a painter assigned to the "#" mark did part of the piece...the border, for example, while Fouillen executed the main design.

The Odetta mark was designed to indicate a series of stoneware art pottery produced by the HB factory and was officially registered in 1922; sample pieces were made in 1923 and spectacular examples were exhibited at the 1925 Arts Décoratifs exhibition, but formal production did not begin until March of 1926. 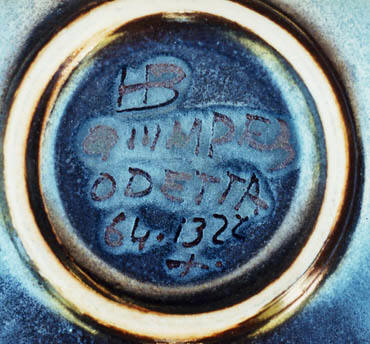 The mark used on Odetta...in production until the 1970s...included numbers indicating, on the left, the form, and on the right, the décor. 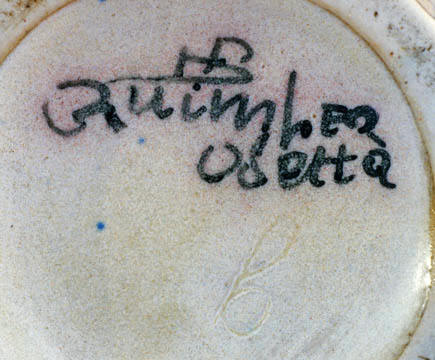 When the form of an Odetta piece was the same as one that was to be made in faïence, a lowercase "g" for grès was engraved in the clay prior to the first firing. This was important as the temperature requirements for firing faïence and grès are quite different. (The engraved "g" is upside-down in this example). 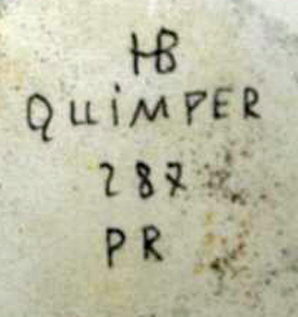 Beginning in 1942 and continuing until the 1960s, the majority of pieces produced at the HB factory were marked as shown above...the numbers signified the form of the particular piece, the first letter identified the head of the studio where it was decorated...there were three different studios...and the last letter identified the individual painter-decorator that did the actual painting on the piece. 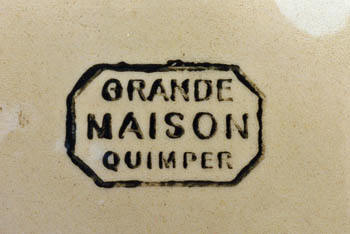 Of course there were lots of exceptions...like this mark found on a piece that was an exception in itself...it was not hand-painted, but a commissioned piece that was actually decorated using decals.


To see examples of marks from other Quimper potteries, click on the images below that represent the various different Quimper potteries. This will take you to examples of the most commonly found markings for each of the different factories. Please remember that this is presented to serve as a guide and is by no means a complete listing. 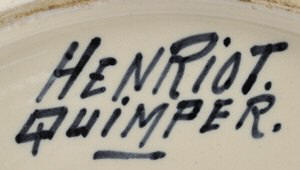 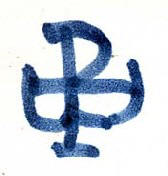 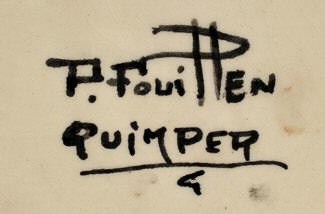 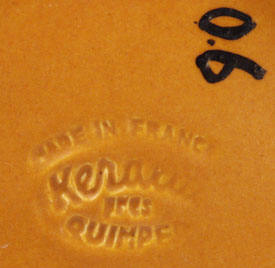 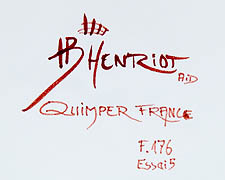 Other Factories
Create a free web site with Weebly