For this page of oldquimper.com, we give the floor to Jean-Pierre, who serves as the CFO (Chief Feline Officer) of The Meadows Collection.  Appointed to that position in 2007, he has gamely agreed to attempt the daunting task of taking over the duties previously fulfilled by the late, but ever-present-in-our-hearts, Porquier-Beau...whose image continues to grace the upper left corner of this link.

Jean-Pierre is fourteen-years-old, which translates to seventy-two in human years. He is still very young-at-heart and so full of enthusiasm that he has bravely stepped up to the plate.

It is with great pleasure that we pass along the latest Memo from J-P:

First a little bit about me: 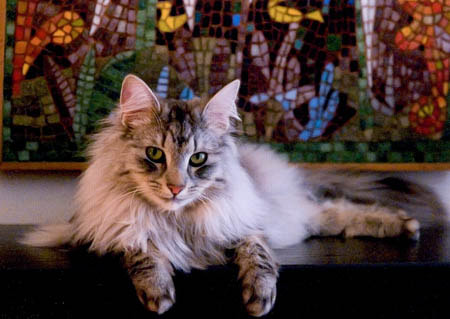 I was born in Paris and am thoroughly français despite paperwork that lists me as being a chat de la fôret norvégienne (Norwegian Forest Cat). My full name is Châtelain Jean-Pierre. Châtelain because being born in 2007... December 21, 2007 to be precise...means that in accordance with French regulations, my name must begin with the letter 'c'.  Those born in 2008 have names that begin with a 'd', those born in 2009 have names beginning with the letter 'e' and so on.

Châtelain is a French term from the Middle Ages used to distinguish the seigneur or lord of the manor. We live in Quimper now, so it's more like lord of the apartment...but the important part is that I rule the roost, so to speak. Jean is in reference to Jean-Baptiste Bousquet who settled in Quimper in 1699 and Pierre is in honor of his son, Pierre Bousquet, who in 1708 founded Quimper's first modern -day pottery factory.
Every once in a while I like to put the spotlight on a specific topic…it might be an unusual example of Quimper pottery or perhaps a further look at a place or structure…something  that I feel will further your enjoyment of French faïence.
And then sometimes I take this opportunity to share with you some of our adventures in Quimper...because one of the results of being so gab-smacked enamored of Quimper pottery has led to the inevitable and now we live in Quimper...right in the middle of Old Town !
I'm an indoor cat, but I do see a lot from our windows and the folks are always up for an adventure. Here's a quick rundown of what we were up to last month...it will give you a bit of a taste of the sights and sounds of living in Quimper.

My favorite window overlooks rue Kéréon...for centuries, it has been Quimper's equivalent of "Main Street". If visitors know only one Quimper street, it's bound to be rue Kéréon...often described as the city's heart and soul.  Twelfth century documents gave it the name via Sutorum (Latin for street of the shoemakers) . The name changed over time...documents dated 1377 refer to it as rue Kéréon which actually is Breton for "street of the shoemakers". The name fits as being just a stone's throw from the Odet River where in times past the tanneries were located and historically, rue Kéréon was the street where the artisans using the leather products were concentrated.

Today, the shoemakers are gone,  but there is more than one shop selling shoes and others that offer chocolate temptations and baked goods, clothing new and vintage and jewelry. The different shops combine to make Old Town Quimper a great place for strolling pedestrians.   Great for my penchant for people-watching, too, and after I've had my fill of everyone enjoy the sights, I like to sit on a window sill to soak up the sun and snooze a bit. The folks are sort of nervous nellies and put up a trellis to keep me from falling out should I get the urge to go after something that flies on by...usually a pesky bird...but the other day...

...it wasn't a bird...it was bubbles.  You have to look hard for them...but my keen sense knew right away that something was amiss.

Rue Kéréon is a magnet for street performers and is a must for every Quimper parade and street musician. But bubbles ? That was the first time for bubbles.

Some of them came sooooo close...I wasn't successful at catching one, but I had fun trying !
The bubbles kind of snuck up on me, but I instantly spied this big red fire engine...

How does he do that ?

Think of all the birds I could chase if I had one of those.

It turned out to not be about birds...he was actually after a wayward television antennae.
But I did see a bird...

There was a movie shoot on rue Kéréon and the subject of the movie was an eagle...and not just any eagle, but a wayward eagle !

The movie is being directed by a local artist...Ariel Neo...and was inspired by the adventures of Dana, an eagle that in 2019 escaped from its " day job" as the star of a show in Audierne featuring trained birds.

For fifteen days, she soared on her own before being found over 350 miles away from home.

The movie recounts her adventures and you can see in her face, that she has a lot to interesting tales to tell !
Finally, the month ended with news of the closing of a Quimper institution...La Civette Maison Breton, the oldest faïence store in Quimper is closing for good. Founded in 1938 by Alphonse Breton, it began as a store selling tobacco and related accessories, but wanting to diversify, he turned to his passion for Quimper faïence,  Prior to his store, Quimper pottery...like so many other products...was sold at street markets and directly by the factory rather than in physical stores.

Breton's store sold cataloged production from both Henriot and HB as well as specially-commissioned items. The special orders were sometimes marked like the plate shown above; other examples have surfaced that had an "A. Breton" mark.
By 1970, his son Jean-Claude Breton was at the helm and La Civette was a must-stop for every Quimper visitor.

The sidewalk sign in front of the store professed that inside were two entire floors of Quimper pottery.

This is Jean-Claude Breton in front of La Civette circa 1980.
Mr. and Mrs. Breton recently passed away, but my folks fondly remember their fantastic collection of vintage Quimper pottery and the warm welcome they gave them in their equally fantastic apartment directly across from the Cathedral Saint-Corentin. (Mom always talks about Jean-Claude offering her a shot of a special lambig...an especially strong Breton brandy. Too shy to decline, one sip and she was instantly dizzy...but they were invited back, so apparently she managed to pull herself together without committing an international faux pas !)

After many years involved in the store, their daughter has decided to explore other ventures, but with the closing of La Civette Maison Breton, Quimper has certainly lost a landmark that was near and dear to collector's hearts.
That's my memo for this month;  I hope you enjoy my sharing our adventures in Quimper!
Welcome
Town, People and Pottery
Shop in Your Slippers
​Factory Marks
Memo from J-P
Your FAQs
​Contact
Create a free web site with Weebly